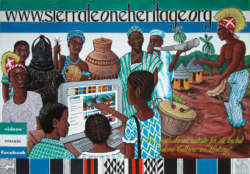 Mural promoting the www.sierraleoneheritage.org digital resource painted by the Sierra Leonean artist Julius Parker on the walls of the Sierra Leone National Museum.
The SierraLeoneHeritage.org digital resource is the main output of a research project entitled ‘Reanimating Cultural Heritage: Digital Repatriation, Knowledge Networks and Civil Society Strengthening in Post-Conflict Sierra Leone’. The project was funded between 2009 and 2012 by the UK’s Arts and Humanities Research Council as part of its Beyond Text programme and was directed by Dr Paul Basu of University College London. The project’s Informatics team was led by Dr Martin White of the University of Sussex.

The ‘Reanimating Cultural Heritage’ project was concerned with innovating digital curatorship in relation to Sierra Leonean collections dispersed in the global museumscape. Building on research in anthropology, museum studies, informatics and beyond, the project considered how objects that have become isolated from the oral and performative contexts that originally animated them can be reanimated in digital space alongside associated images, video clips, sounds, texts and other media, and thereby be given new life. At the project’s heart was a series of collaborations between museums including the Sierra Leone National Museum, the British Museum, Brighton Museum and Art Gallery, Glasgow Museums, the World Museum Liverpool, and the British Library Sound Archive . The project also engaged in capacity building activities in the cultural sector in Sierra Leone and commissioned the production of videos on cultural heritage themes from Sierra Leonean partner organisations including Ballanta Academy of Music, iEARN-Sierra Leone, and Talking Drum Studios.

Another key objective of the project was to experiment with the integration of web-based social networking technologies into the digital heritage resource in order to (re)connect objects in museum collections with disparate communities and to foster reciprocal knowledge exchange across boundaries. Visitors to SierraLeoneHeritage.org can become part of its community, contribute comments, engage in discussions, and upload their own images and videos by joining the Sierra Leone Heritage Facebook Group.

Other items listed by Sierraleonebusiness